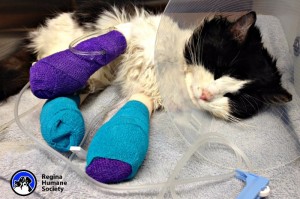 This is Bruce Almighty. This sweet cat was found in Regina, SK, Canada in March, with his legs and paws bound in electrical tape. The good folks at the Regina Humane Society began caring for Bruce right away, but his care would be extensive, and costly.

Director of Development Karen Mercier quickly went to work on a crowdfunding campaign for Bruce, with a goal of $5k. The campaign quickly went viral, and raised nearly $25k. And there’s a happy ending…Bruce made a strong recovery and has a new adoptive home!

Karen shares with Fablanthropy how crowdfunding made a difference in helping the RHS save Bruce:

Fablanthropy: What made you decide to launch a crowdfunding campaign to raise funds for Bruce?

Karen: I decided to launch a crowdfunding campaign the morning after Bruce Almighty was brought in by our officers. I knew he was in dire condition and would require extensive medical treatment that could drain our fund for injured animals. I also believed that once people learned of his story and all that he had been through, they may want to assist by donating. Using crowdfunding was an easy and cost-effective way for to raise funds while providing timely updates to donors.

Fablanthropy: Why did you decide on GoFundMe? What are the pluses and minuses of that platform?

Karen: I had previously done a campaign on GoFundMe for a dog requiring corrective leg surgery and it was successful, so I felt confident using the tool again. I was familiar with the set up and management. I also chose GoFundMe because it has a strong recognized brand in the media and on social media and members of the public are familiar with its usage.

Fablanthropy: How do you think what you raised on GFM compared to what you would have raised through other efforts (online and offline)?

Karen: There is no comparison. We did receive off-line and website donations for Bruce, but they pale in comparison to what was raised via crowdfunding. This is largely due to the huge reach of his campaign. We only posted his GoFundMe link once to appeal for donations, but that post was seen by close to a million people on Facebook. In addition, as media interest in his story went worldwide, the media was critical in sharing the donation link with the public. As a result, the bulk of the GoFundMe donors were outside of our city. Many were from outside of Canada. We simply couldn’t achieve that reach with a website link or appeal for mail donations.

Fablanthropy: What should fundraisers keep in mind when deciding to use crowdfunding to raise funds for a project/effort?

Karen: That it won’t work in every situation. In my experience, it works best in an emergency situation or in response to a very compelling story. People respond to crowdfunding primarily on emotion, and the idea that they can make a donation and immediately see how it is contributing in combination with others who are giving the same way. Seeing the goal thermometer go up, often very quickly as in the case of Bruce Almighty, it something many donors check back to see. It’s immediate gratification. This can be lost when a campaign isn’t successful or is based on a less compelling case. People want to join a winning team, which is why I believe you see Bruce Almighty’s campaign raising $20,000 over the goal. It was clear that within hours we had raised enough for his care but people kept giving. They wanted to be a part of his story and his recovery. I would also urge fundraisers to use the tool to post updates and often. I also used it to personally message each donor a thank you. The responses I received from hundreds of people around the world to these stewardship activities were incredible. We often emailed back and forth and the donors expressed how involved they felt with Bruce’s recovery despite being halfway around the world. To me that just wouldn’t have been possible without the crowdfunding platform.

Fablanthropy: What tips do you have, especially for integration into other social media?

You need to tend to your own garden first, meaning your charity needs to have its own strong social media platforms to make a crowdfunding campaign successful. Crowdfunding depends on social media and traditional media to be successful. If you don’t have a social media base that is engaged and at the ready to share your requests, it is much harder to raise donations in this manner. The same goes with traditional media. One only has to look at the crowdfunding campaigns that raised millions of dollars over goal (purchasing an individual a car, giving in response to bullying) to see that traditional media played a huge part in sharing the story and how to donate. When you have strong ties to both forms of media, you have a good basis to try crowdfunding.

Have a story where mission + fundraising skills = success? Email lisa@fablanthropy.com to be featured in a future Mission Mondays.

The intersection of fabulous and philanthropy. View all posts by fablanthropy